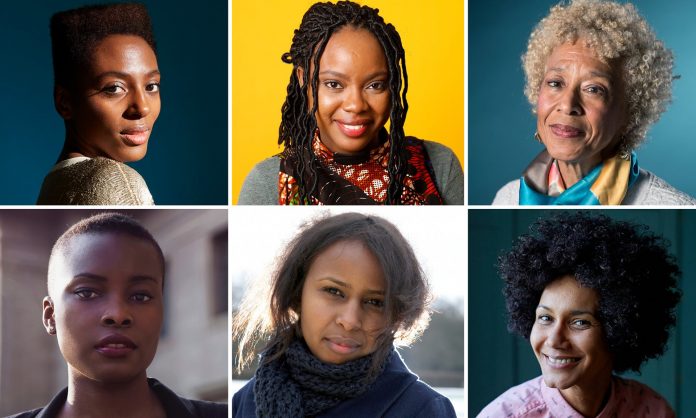 More than 25 years after her groundbreaking Daughters of Africa anthology, Margaret Busby reflects on the next generation of black women writers around the world

Time was when the perception of published writers was that all the women were white and all the blacks were men (to borrow the title of a key 1980s black feminist book). At best, there was a handful of black female writers – Toni Morrison, Alice Walker, Maya Angelou – who were acknowledged by the literary establishment. This was the climate in which, more than 25 years ago, I compiled and published Daughters of Africa. It was critically acclaimed, but more significant has been the inspiration that 1992 anthology gave to a fresh generation of writers who form the core of its sequel, New Daughters of Africa.

The critic Juanita Cox told me: “I received Daughters of Africa as a birthday gift from my father. Two things immediately struck me about the book. It was huge and it contained women like me. Even though I’d been brought up in Nigeria, I had had very little exposure to black literature. At school the only black characters I’d ever read about occupied the margins: figures like the Sedleys’ servant Sambo and the mixed-race heiress Miss Swartz in Thackeray’s Vanity Fair. Daughters of Africa introduced me to a huge number of writers I’d never previously been aware of. And on a more personal level it made me realise that I was somehow valid. The anthology was peopled not just by women of ‘pure’ African descent, but also women of mixed ancestry, and just like the women the book contained, I too could have a voice.”

Ivorian Edwige-Renée Dro said: “It was as if the daughters of Africa featured in that anthology were telling me, their daughter and grand-daughter, to bravely go forth and bridge the literary gap between francophone and anglophone Africa.” Bermudian writer Angela Barry, meanwhile, spoke of her thrill at coming across a contributor whose father was from her island, allowing her to feel “that I also was a daughter of Africa and that I too had something to say”. Writer Phillippa Yaa de Villiers recalls: “We were behind the bars of apartheid – we South Africans had been cut off from the beauty and majesty of African thought traditions, and Daughters of Africa was among those works that replenished our starved minds.”

New Daughters of Africa has been a truly collaborative venture: writers steered me in the direction of others whose work they admire. Altogether, more than 200 writers from more than 50 countries contributed work to the new anthology, from Margo Jefferson to Ayòbámi Adébáyò, Malorie Blackman to Yrsa Daley-Ward. New Daughters of Africa begins with some important entries from the 18th and 19th centuries – a reminder that later generations stand tall because of those who have gone before. Nana Asma’u (1793–1863), a revered figure in northern Nigeria, spoke four languages and was an educated and independent Islamic woman whose life and work can be considered a precursor to modern feminism in Africa. Sarah Parker Remond (1815–1894), abolitionist, lecturer, suffragist, demonstrates many of the themes and serendipitous connections that characterise this anthology. Her letter of September 1866 to the London Daily News, in which she waxes eloquent on “the reactionary movement against the coloured race in the United States”, and castigates the social commentator Thomas Carlyle for having “claims to the gratitude of all negro haters on both sides of the Atlantic”, makes one wonder how she might have reacted to a tweet by Donald Trump. Elizabeth Keckley (1818–1907), her life bridging the 19th and the 20th centuries, describes first hand the trauma of enslavement in her autobiography Behind the Scenes: Or, Thirty Years a Slave and Four Years in the White House, published in 1868 – exactly 100 years before the “mould-breaking year” that Delia Jarrett-Macauley refers to, when “on university campuses from Paris to New York, students were protesting against the old order, against bureaucratic elites, against capitalism, sexism and racism and all forms of authoritarianism”.

The year 1968 was blighted by the assassination of Martin Luther King in April. Later that month Enoch Powell gave his infamous “Rivers of Blood” speech, scaremongering about mass immigration to the UK. And it was in that year that Angela Cobbinah, the only black girl in her Cornish village, watched African American athletes Tommie Smith and John Carlos raise their fists in a Black Power salute on the podium at the Mexico City Olympics. “I felt an unfamiliar emotion,” she writes. “Call it connection or kinship, or the bubbling of a youthful rebelliousness.”

Such connections, and bonds of kinship, actual as well as intuited, strengthen the links between contributors. There are the literal mother-daughter relationships, as with Josephine St Pierre Ruffin (1842–1924) and Florida Ruffin Ridley (1861–1943). It is pleasing to note the emergence as a writer of Yvonne Bailey-Smith, having raised and empowered three successful children (Zadie Smith and her brothers), to witness Attillah Springer following the path of her mother Eintou Pearl Springer, a contributor to Daughters of Africa, and to see Rebecca Walker, daughter of Alice Walker, achieve prominence in her own right.

In many ways 1992 seems much longer ago than a quarter century; yet, while much has changed, many challenges remain to the publication of work by women of African descent. Who imagined in 1992 that we would celebrate the first African American US president in 2008, and who could have predicted who would follow Barack Obama in the White House? Much more empowering to think of Michelle Obama, who in 2018 broke records with her memoir Becoming, selling 1.4m copies in its first week.

In 1992, Morrison had not yet been awarded the Nobel prize. Only the following year did she become the first black woman to win it. Many accomplishments were years away: Jackie Kay, the current Scottish makar and a contributor to the first anthology, had only just begun to receive recognition after the 1991 publication of her first book. So the authors within New Daughters of Africa that may still be unknown are as deserving of attention as the household names.

Custom, tradition, friendships, romance, sexuality, intersectional feminism, the politics of gender, race and identity – all are explored, in ways that are surprising, angry, considered, joyful, heartrending. Taboo subjects are addressed head on, familiar dilemmas elicit fresh takes. How candid and engaging is Ted Hughes poetry prize-winner Jay Bernard’s “I resist the urge to destroy my own records by reflecting on archives, how I use them, and what they have meant to me”. How touching is Andaiye’s recollection of her amity with Audre Lorde:

Lorde’s name recurs in other contributors’ work, including that of Edwidge Danticat, Sisonke Msimang and Panashe Chigumadzi, who writes:

I do not remember when I wrote Audre but I did, and I remember that she answered immediately and sent me a copy of A Burst of Light with the inscription, “Sister Survivor – May these words be a bridge over that place where there are no words – or where they are so difficult as to sound like a scream!”

Lorde’s name recurs in other contributors’ work, including that of Edwidge Danticat, Sisonke Msimang and Panashe Chigumadzi, who writes:

It wasn’t until I met the force of the unflinching stories of our mothers and grandmothers and aunts and sisters written by black women that I was compelled to find an answer to the question: “what did it mean to be a black woman in my grandmother’s time?”

The different ways of connecting to an African heritage are an ever-present theme, as are stories of migration, and specifically “Windrush stories”, typified by the poignant writing of the late Andrea Levy, whose father was among those immigrants who sailed to Britain from the Caribbean on the Empire Windrush in 1948. Stories of mothers separated from offspring through transatlantic crossings, and the resultant psychological effects, inform many of the contributions.

How you find your identity in the course of growing up in Britain is a major thread, whether it is Simi Bedford describing the particular experience of being an African at boarding school in England shared by many (myself included) or Nah Dove making the journey from a childhood in West Africa.

So often London encapsulates the black British experience, with all its possibilities for racism, and much else besides. For Donu Kogbara, whose harrowing tale is of being kidnapped in her Nigerian homeland, London has become a sanctuary.

The book reveals works in progress, identities in transition, shapeshifting sensibilities, a delicious mash-up of expectations. Who knew that Nadifa Mohamed, one of Granta’s best young British novelists in 2013, was also a fine poet? The chef Zoe Adjonyoh, from whom cookery writing might have been expected, delivers a memoir of her father that is indeed “A Beautiful Story”. Contributors are drawn to write about countries not theirs by birth: a Zimbabwean shines light on Antigua, Ghana has an impact on a writer from Trinidad.

Another link with Daughters of Africais the image on the UK cover, by black British photographer Suzanne Roden, featuring her friend Sibusiso Nozipho Mavolwane (1958–2015). Busby herself exemplifies the international scope, historical trajectory and enduring female bonds represented by the 200-plus women in New Daughters of Africa. The third of five sisters, she was born in what was then Southern Rhodesia, lived in the former Gold Coast, attended boarding-school in Sussex, and from the 1980s worked in London. New Daughters of Africa pays tribute to her as well as to the many writers we have lost, most recently the talented Andrea Levy.

The aspirational mantra of inclusivity and diversity is increasingly routine, fashionable even, in today’s publishing industry, but lasting change has yet to be achieved. Verna Wilkins, founder of the children’s imprint Tamarind Books, explains in her essay that she began hands-on work creating books in diverse classrooms in the belief that the process must start with children: “They should see themselves as the authors, editors, designers, illustrators and publishers of the future.”

A rise in apprenticeship wages is tempting those put off by...

How Could a University Marketing Graduate Get It So Wrong?!

How YOUR Nonprofit Can Master Visual Storytelling

Tim Dowling: Why is an angry skier offloading on me?